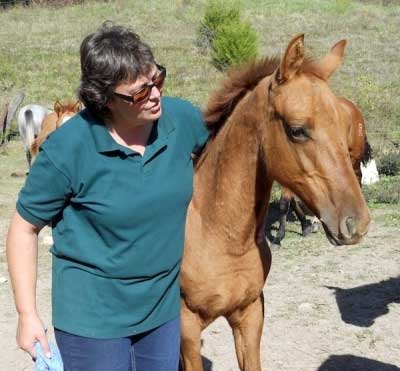 The farm's herd of about 20 horses, kept mostly on pasture and fed round bales, includes three colts born in April and another three in June.

One favorite, a black-and-dun-colored grullo filly, "is a sweetie", Sheppard said. "I may keep her, but we always say we're going to sell the good ones".

Having horses around comes naturally to Sheppard, who grew up riding on the farmland where she and her family now live. Her husband Bill rode "off and on" growing up, and sons Cody and Evan have almost always been in the saddle. Bill Sheppard started spending more time in the saddle when his wife moved beyond trail riding which he said "just bored me to death" into working events like cattle penning and sorting.

Using the horses with the family's 100 head of cattle, including the family's annual roundup, is a way for them to earn their keep. "She's got to make so much money, or we're going to replace them with cows", Bill Sheppard said just to tease his wife.

"Probably the most difficult part is helping make it pay for itself", she said. "We have good years and bad years, years that they make money and years they don't".

Sheppard markets the horses through the farm's website, selling to horse lovers across the country and delivering within a 250-mile radius.

"I'm not a trader. I don't take trade-ins, just because I don't want somebody else's problems", she said. "The biggest thing with horses is one person's trash is anothe''s treasure. You could have a perfect horse, and someone else could hate it".

Buying a 2-year-old stallion with good breeding put the Sheppards in the breeding business.

"We knew what kind of horses we liked. We wanted to raise that kind of horse -- the athletic type horse that's good with the cattle events, the roping, the ranching, the cutting", Sheppard said. "We do like a little speed in our horses. If you're doing cattle work, you need speed to catch a fast cow".

Training the horses takes time. Family friends Bruce and Dawn Smith of Hannibal, Mo., start the training process, spending about 30 days working with the horses before they come back home to Bee Creek Quarter Horse and Cattle near Pearl. "We can handle them after 30 days, but they still need a lot of work to be ready to do things. They probably go back and get another 60 days the next year", Sheppard said.

"One thing I like to do with my colts is work with them when they're little so they're very gentle, used to people and have pretty good manners", Sheppard said. "Horses are very big. I don't want something that big afraid of me. Then it becomes dangerous".

The cattle events have grown in popularity in the area in recent years with several fairgrounds and other venues offering weekend competitions. Rules differ event to event, but the goal is the same -- to sort, or separate, certain numbered cattle from the herd in order across a line or into a pen.

"When a horse is chasing a cow, it makes you more confident as a rider. You're worried about the cow not about the riding", she said. "We're doing all timed events. It's not about how pretty you look which is kind of nice. We don't raise horses for looks".

The Sheppards got involved in the sport about 10 years ago. Cody competed in state, national and world shows with the Missouri Quarter Horse Association youth team but now plans to ride just for fun, joining his parents as "weekend warriors" on horseback.

Sheppard also plays a key role with the Mounted Angels Therapeutic Horsemanship program which gives children with disabilities an opportunity to ride. "If you're going to have horses, you need to have fun with them", Sheppard said.

Not every horse is suited to the competitive events, so the Sheppards focus on horses to "do what we need to do", Bill Sheppard said.